Abus is a company founded in Germany specializing in security

It was in 1924 that the activity of Abus began, founded by August Bremicker and his sons in Volmarstein in the Ruhr area, in Germany. ABUS comes from the acronym August Bremicker und Söhne (August Bremicker et fils). Today the third and fourth generations run the company.

The first products manufactured are padlocks from the "Iron Rock" range.

Abus padlocks are used with a chain to secure a bicycle.

In 1971, Abus offered the first U-lock for bicycles, mopeds or motorcycles.

In 2007, Abus bought CSI a company located in Denmark and specialized in the supply of parts and accessories for bicycles.

The Bremicker family participates in the evangelical precepts of the Plymouth Brethren (Brüdergemeinde), a church movement born in the 19th century. The religious orientation of the family affects the ABUS business which is shaped by Christian principles. There are no women in the management and among the shareholders of Abus. In order to exclude the succession of daughters, so-called inheritance waiver agreements have been concluded in the past.

Abus is an international group of 3000 employees present in the United States, Europe and Asia, specializing in security systems: video surveillance, access control, home and access protection, as well as theft control protection. of the two wheels. The helmets offered by Abus for the protection of cyclists are designed and manufactured by CSI in Denmark.

The development of the Abus group is continuing with external acquisitions complementary to the security-related activities.

The range of products developed by Abus and intended for bicycles is wide because helmets and locks of all kinds are offered such as U-lock, ball-type, cable or chain locks.

Abus innovates by offering a helmet in which a lighting system is integrated in order to be visible to road users coming behind the cyclist.

The products designed and developed by Abus are intended for occasional cyclists who practice city, electric, mountain bike or hybrid bikes.

Our range of Abus accessories:

We offer a large number of Abus accessories for city and electric bikes in new condition from stock or revised used.

Since the accessories manufactured by Abus are of good quality, we can offer them in used condition, their general condition is rated on a scale from 0 (for parts) to 10 (new in its packaging). Here are the control criteria we apply to Abus components before they are released for sale:

Our observations are indicated in each advertisement and photos make it possible to identify the areas concerned. 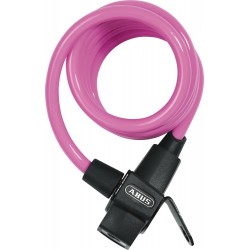