Mafac was a French manufacturer specializing in the design and production of brakes and accessories for bicycles, this brand has now disappeared.

Mafac is the acronym for Manufacture Arvernoise de Freins et Accessoires pour Cycles, the company's head office was located in Clermont Ferrand. Mafac was one of the major equipment manufacturers in the cycling equipment industry, mainly located around Saint-Etienne in France.

It was in 1947 that the Sécurité company took the name of Mafac. At that time Mafac produced "criterium" series cantilever brakes fixed by pivots on the fork and the frame, this type of braking still used on cyclo cross bikes generates good braking power. Mafac also designs and manufactures brake levers The brake pads are produced as a subcontractor, the rubber formulation is nonetheless specific to Mafac.

In 1952, Mafac offered the first central pulling jaw brakes equipped with pads adjustable in height and inclination with respect to the brake band of the rim, this very popular series of brakes would be the Mafac Racer series that professional cyclists would use in race. The other advantage of this brake series is that it is no longer necessary to weld cleats on the frame and the fork because the Mafac Racer is fixed by a central pivot.

In the 60s to 80s, Mafac will decline its Race model in multiple variations such as Tiger, Top 63, Mafac 2000, Mafac S, Mafac competition and Mafac GT.

In the 80s Mafac was subjected to competition from drivetrain specialists such as Shimano and Campagnolo who offered side-pull brakes, more compact and lighter. Mafac will respond to this new trend by offering equivalent brake calipers series LC, LS, LSX and LS2 but their lack of reliability will mark the decline and then the end of Mafac.

Nevertheless Mafac will be part of the Spidel consortium made up of Mafac for the brakes, Maillard for the hubs and freewheels, Simplex for the derailleurs, gear changes and seat posts and Stronglight for the cranksets and bottom brackets, the objective of this partnership. between manufacturers was to compete with generalist drivetrain manufacturers.

The Mafac brand has been taken over, it is now called Mafac advanced equipment, it offers rim brake pads for V-brakes or cantilever.

Our offer of Mafac products :

As Mafac components are no longer produced, it sometimes becomes difficult to supply them for the renovation of an old bicycle. Since the parts and accessories produced by Mafac are of good quality, we offer them in new destocked or second-hand revised condition. Second-hand components are cleaned, inspected and their functionality checked for your complete satisfaction. Their general condition is noted on a scale from 0 (for parts) to 10 (new in its packaging), this note is based on the observations during inspections and some pictures and scratches or traces are visible on the photos of the product sheet.

Sort by:
Sales, highest to lowest Relevance Name, A to Z Name, Z to A Price, low to high Price, high to low
Showing 1-1 of 1 item(s) 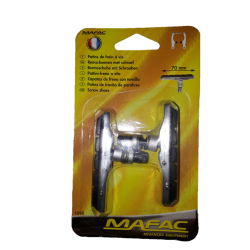